Fortnite’s Meteorite Mystery Continues with New Changes to the Map

May 31, 2018Not Only VideogamesGames NewsNo Comments

Transform Your Computer into the Best Mobile Gaming Device!
Download for FREE BlueStacks and play your best mobile game on your PC for FREE. TRY IT NOW

Another week, another round of map changes.

The meteorite at Dusty Divot has been gotten a visual update since Fortnite’s latest patch and whatever is inside is starting to show.

Taking a dive into Dusty Divot will show that the giant crater has once again evolved. Small patches of grass with brand new trees have grown around the research facility, signaling the start of the earth reclaiming the meteorite’s destruction. 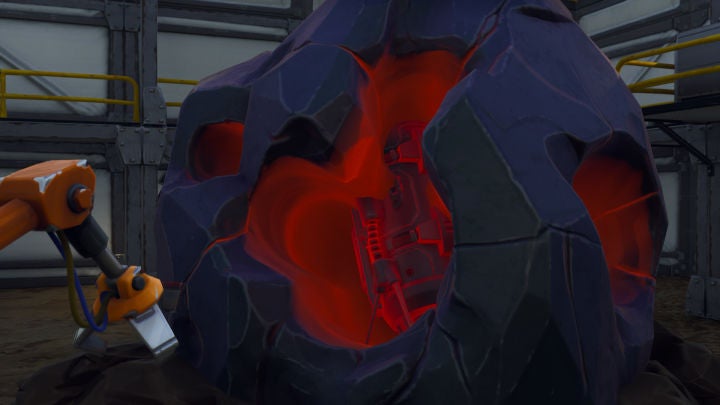 The meteorite itself has gotten an upgrade of its own. The number of holes drilled into the meteorite has increased since the last time it was tampered with, revealing more of the metallic object inside. A red glow emanates from inside too, leaving an ominous mystery as to what this foreign machine could be.

Odd roots have started to appear across the map. You can’t break or interact with them and they offer no explanation as to why they popped up. The crater at Risky Reels has been filled in, just like the crater from Tilted Towers. Hop Rocks have been moved around the map and sit in truck beds, specifically the ones at the soccer stadium.

The northern building at Loot Lake has gotten a revamp. A new weekly challenge asks four different players to stand on each of the unlit floor tiles in the corners of the room to raise a disco ball at the center.

Other smaller and undocumented changes also made it into the update. A skull icon below the minimap used to show your current kill count but it’s now been replaced with a crosshair icon. When viewing a glider or an emote, a new option to replay the animation can now be found at the bottom of the screen.

Get an early look at leaked skins, gliders, and emotes and use our Week 5 challenges page for tips and tricks on completing all seven.

Michael Koczwara is a freelance writer who is ready to boogie down at Loot Lake. Follow him on TwitterÂ and YouTube.

Stan Lee Has A Very Unexpected New Movie Cameo, And It’s Not In A Marvel FIlm

Overwatch’s D.Va Has New Skin And Sprays, But You’ll Have To Jump Through Some Hoops To Ge Them

You can find out more about which cookies we are using or switch them off in settings.

This website uses cookies so that we can provide you with the best user experience possible. Cookie information is stored in your browser and performs functions such as recognising you when you return to our website and helping our team to understand which sections of the website you find most interesting and useful.

Strictly Necessary Cookie should be enabled at all times so that we can save your preferences for cookie settings.

If you disable this cookie, we will not be able to save your preferences. This means that every time you visit this website you will need to enable or disable cookies again.